Watermelon is a classic summer dish. Whether it is eaten in a fruit salad or by itself, it has just the right amount of flavor and hydration. A watermelon is ninety percent water, hence the name. So it’s safe to say watermelon is not only delicious but can help keep you hydrated.

Now, watermelon is not usually one of those foods that is used in a plethora of recipes and seasonings. Especially with… mustard. But a recent trend on the app TikTok has people wondering, what does that taste like?

Some cultures do put savory toppings on watermelon, like salt. Many Southeast Asian cultures like to mix the sweetness of fruit with salt. But it is safe to say that mustard with watermelon is not that kind of thing.

It all started out (as more and more things do these days) with a TikTok video. This wouldn’t be the first time a food trend has started on TikTok, especially since the rise of the pandemic. But this is definitely one of the more controversial ones. The original video has garnered millions of views.

The original TikTok video specifies that the mustard must be French’s, so if you do decide to try this keep that in mind.

Likely what got the video even more traction, was the musician Lizzo trying it for herself and uploading the video to her own TikTok account. More than once, actually. Like many of us, she wanted to see for certain if it was worth it.

Lizzo is known to stay up to date with TikTok trends. Particularly with food, she has been known to say “don’t knock it till you try it!” Her original video got millions of views within the first day. Before gathering the supplies to make this unusual concoction, she did not seem too happy. As she released a big sigh, she walked into her kitchen to cube some watermelon.

After dipping a watermelon cube into mustard and taking the first bite, she appears to be caught off guard. She never really said for sure whether she liked it or not, but can be seen continuing to dip the cubes of watermelon into the mustard. Towards the end of the video, she says, “I just don’t understand.” It’s safe to say this is how most of us feel about this.

Lizzo later commented that she ended up trying it again with tajin, which seems to be a safer bet. Tajin is a Mexican spice made from many seasoning ingredients, including lime, pepper, and salt. So it does make sense that tajin would pair well with watermelon, at least better than mustard would. It is salty and tangy, and a little spicy. The taste of tajin does not seem to be as overpowering as that of mustard when eaten with watermelon.

As mentioned, it is common in many cultures to mix the sweetness of fruit with salty or savory toppings. As salt marinates in your mouth with fruit, it brings out the flavor of both and gives it a taste similar to candy. But in this case, with mustard, there is an added element of tanginess.

After scouring the internet, it is hard to find anyone who really, truly, enjoys this interesting combination of food. Besides the original poster, who may have just done so to get more interaction on their account, which certainly worked.

As you could probably expect, the taste of watermelon and mustard together is not exactly objectively pleasant. Maybe you would like it, but the general consensus is what you probably think it is (no thanks). If you want something that has a more guaranteed positive outcome, though, try sprinkling some salt onto the next fruit you eat.

If you enjoy savory foods and don’t have a very big sweet tooth, you may actually enjoy mustard on watermelon. Taste is subjective, especially with this.

There is another condiment that seems better suited for fruit; mango chutney. It is a condiment that has been known to pair well with fruit, as well as any other meal or snack. Peach chutney and apple chutney also exist, and would taste far better alongside watermelon than mustard would. Fig jam could also be a more appetizing watermelon condiment.

If you want to spice up your watermelon without doing something as outlandish as using a condiment on it, perhaps something more tame like a smoothie or popsicle would do the trick. Frozen fruit can last for many months in the freezer, up to ten months to be exact.

As TikTok has taken the world by storm, so have the trends that come with it. Thankfully, nothing too dangerous like YouTube’s salt and ice or cinnamon challenge, but the food trends that have come from TikTok are certainly very unique.

Mixing something salt and savory is not unheard of. Many Asian cultures sprinkle some salt onto their fruit salads to make the fruit dissipate in your mouth better, and bring out the flavor. But mustard is a rather strong, rich tasting condiment that is very tangy.

Watermelon with mustard is not something that is a conventional combination, by any means. It seems as if the flavor and texture of mustard would overpower the watermelon, but of course this depends on how much you would decide to use. The general consensus seems to be that it is not completely disgusting, but not super appetizing either. The good news is that these are two common summer ingredients so you can feel free to try it for yourself! 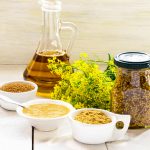 The Best Substitutes For Mustard Oil 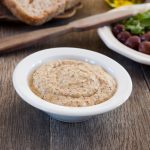 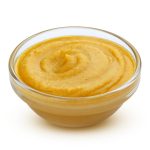