Nori is a type of Japanese dried seaweed. It’s made from a species of red algae and has existed since the eighth century. It’s mainly used for making sushi rolls, as the dark exterior of the roll. Production of it slowed during World War 2, but has only picked up since then. It will always be a traditional Japanese ingredient in sushi.

It’s often a decorative food, used to wrap sushi and rice balls, but it has an astonishing nutritional value and is commonly eaten raw because of this.

The flavor of Nori is somewhat overpowering, which is why it’s such a common ingredient in sushi. Its main flavor is salt. It is harvested from the sea so the salty flavor is natural and not artificial. It has a rather bumpy texture which impacts the taste.

To gather nori, oyster shells are placed on fishing nets to attach nori seedlings. The buds must dry above sea level, during low tide. This is to prevent algae growth and motivate the nori buds to grow. After about a month, the nori is ready to be harvested.

Once it’s gathered from the sea, nori is brought to a facility to be cleaned. Then it’s minced and blended into tiny pieces to create a paste-like mixture. The mixture is then poured into molds where it is dried and pressed to go through a drying machine that will dry it more thoroughly.

When it’s off the drying conveyor belt, sheets of nori are sorted into packs of ten, of which ten are bundled together, creating 100 bundles of sheets. A production team then inspects these sheets and loads them into a roasting machine for the final step. Each sheet must pass a quality check before being sent out to be sold.

Is Nori Good For You?

Sushi itself may not be as good for you as you might think, but nori is considered a superfood. Nori is often the dark green outer lining of sushi rolls. It’s an edible algae that Asian cultures attribute to health and longevity.

It contains ten times more calcium than milk, and can help you avoid iron and iodine deficiency. It has the biggest range of nutrients in any food. The chemical composition is so similar to that of human blood plasma, it’s great for purifying our blood. In addition to this, Nori contains:

Adding Nori to your diet can benefit your health in many ways. It regulates thyroid function and keeps your bones strong and healthy. There is a saying in Japan, “two sheets a day keep the doctor away,” similar to the American phrase about apples.

In Korea, it’s well integrated into their culture and served as soup on birthdays. It’s also commonly given to women three weeks after childbirth. Elders say it helps rejuvenate the body, and when you look at the nutritional information they were definitely onto something!

How to Eat It

Most commonly, Nori is the dry outer shell of sushi. It can also be eaten shredded, and mixed with other ingredients that have a high nutritional value like sunflower seeds. Often it’s also sliced into strips. It’s used in a variety of Japanese dishes such as ramen, omelets, soups, and salads.

When it’s added to another food, it adds a nice salty element that enhances the meat or vegetables already present. It’s meant to create a variety of textures in a meal such as sushi. Because of its health benefits, many people also choose to eat plain Nori which is bumpy in texture and salty in taste.

Nori is a type of seaweed, derived from algae, that is very popular to use as the outer roll in sushi. It has a great nutritional value and contains plenty of calcium, protein, and vitamins. Nori has been a part of traditional Japanese dishes for centuries. It tastes very salty since it’s straight from the ocean, and the texture of Nori strips are bumpy. 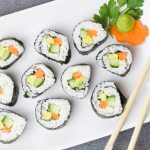 How to Reheat Sushi in 5 Easy Ways 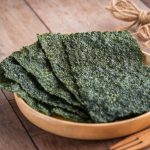 13 of the Best Nori Substitutes 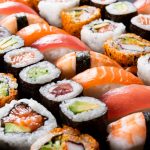 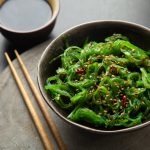