Ham is pork and pork is ham… right? Aren’t the two things one and the same? Well, as we’ll get into today, you’ll see that there’s actually a pretty major difference.

Pork is a whole category of meat, ranging from all sorts of uses, whereas ham is a specific food item. Therefore, all ham would be considered a pork product, but not all pork can be referred to as ‘ham’.

The confusion can arise from the way people talk about things in casual conversation or on TV. It can be easy to consider ham and pork to be interchangeable since they both come from the same place.

If you’re talking about either one, you’re of course referring to the meat of a pig, no big revelation there. As such, oftentimes people treat them as though they’re two different names for the same thing, synonymous. But that’s far from the truth, as we’ll get deeper into throughout this article.

The simplest explanation is that pork is a cut of meat from a domesticated pig. In its rawest form, with nothing else done to it, that meat is considered pork. It doesn’t have to be served up any special way or given any additional seasoning to be considered pork.

It also doesn’t matter what part of the pig you’re talking about. The leg, the belly, the shoulders, and even the tail of a pig are considered pork.

As such, pork is one of the most widely consumed meat products in the world. It’s served in all sorts of ways, freshly cooked or preserved. And one such form that pork comes in, happens to be a ham!

Ham is a cut of pork that comes from a very specific part of the pig, namely the creature’s hind leg. Effectively any meat that comes from this era could be classed as ham. There is no shortage of ways to prepare and serve ham from there.

You could have fresh ham, cured ham, country ham, hickory-smoked, or Black Forest ham. The full cut of a hind leg would be considered bone-in, whole ham. Contrast and compare that to boneless ham, which is often pre-sliced and served as deli meat for sandwiches.

Wet curing – otherwise known as brining – or traditional dry curing can be used to preserve ham. It can be preserved along with its seasonings as well, such as salt or honey.

While most of us have probably tried out ham at some point in our lives, there are always exceptions! Some folks just never get the chance. The taste of ham depends on what kind you’re talking about. But in general, ham is sweeter than your average meat.

Ham vs. Pork: What’s the Difference?

Now we’ll be getting into the nitty gritty. We know ham is specifically the leg of a pig. But what else separates it from other pork products?

Raw pork tends to be either white or a pale pink color, not unlike a pig itself. Compare this to store-bought ham, which by the time you purchase it, has already been cooked. Ham is therefore darker, often brown on the outside with a deeper pink on the inside. Of course, that depends on if we’re talking medium or rare.

See also  Beef vs Veal: How is Beef Different From Veal?

Raw pork is pretty bland and mild when cooked all on its own. It relies a fair bit on seasonings and sauces to get the kind of flavor you’re looking for. Of course, that mildness makes it malleable, and so its taste can be altered in a number of ways.

Compare that to ham, which is quite packed with flavors. As stated it’s often sweet, but also smoky and salty. This is a result of the way that it’s been cooked, cured, and processed.

We’ve already brought up curing, smoking, and drying methods of processing ham. As a rule, ham always goes through these processes before it turns up in stores.

Pork on the other hand is available in its raw state, entirely unprocessed. It doesn’t undergo curing, or any smoking or drying. However, from that state, it can be flavored and cooked in any number of ways.

Pork absolutely needs to be cooked before it’s eaten since it’s sold uncooked. There’s a lot of flexibility there though, as it can be baked, grilled, roasted, or fried, among other things.

Cured ham will already be cooked by the time you purchase it. You can take ham directly from a store and eat it in the car on the way home! Though we don’t recommend that as it’s not the safest driving practice…

As such, store-bought ham can be used directly as the main dish or cut up and used throughout other dishes.

Shelf life is a big thing that separates ham from raw pork. Due to its intense processing and preservation, cured and salted ham lasts a lot longer.

This of course depends a lot on the type of ham you’re talking about. Country ham can be refrigerated for up to a week without losing quality. Meanwhile, you can leave dried, cured pork meats such as prosciutto at room temperature for two to three months.

With raw pork, you’re going to want to either cook it the day you bring it home or fridge it. But it’ll only last 3-5 days in a fridge before the quality dips. Freezing raw pork is also an option and it can last for roughly a year in that state.

Ham slices can find their way into a number of dishes. That can mean long deli-style slices, or little chopped up bits, which are great on salads.

Pork, being a raw meat substance, is often used much earlier in the cooking process. Frequently it’s used as a major ingredient in curry. It also finds its way into other meat-based products such as sausage, salami, bacon, or… get this; ham!

By now you probably understand the difference between ham and pork. But this section will serve to really drill it home, and give you some potential cooking ideas to boot! Let’s look at some of the most popular kinds of pork products.

Who doesn’t appreciate a good slice of bacon? Great for breakfast, or in a cheeseburger! Bacon is made from cured, smoked, and sliced pork belly.

A welcome part of most sandwiches, salami is a fine deli meat for sure. It’s a cured meat that is most commonly pulled from the neck of a pig.

Not the most glamorous of names, Pork Butt is actually pulled from the upper shoulder of the pig. After a lengthy smoking process, it’s then commonly shredded and used in barbeque sauce.

The loin of a pig, in case you were curious, is located in the upper back, behind the ribcage. This cut of meat is most frequently utilized in pork roasts.

A very popular pork cut to be sure, these are thick cuts of meat modeled after steaks. These cuts are also cut from the loin region of the pig.

A beloved topping for enjoyers of pizza across the globe! Sometimes beef finds its way into pepperoni, but it’s usually predominantly – and often 100% – made of ground pork!

Cheaper and tougher than other pork products, Pork Shoulder is generally slow-roasted for best results.

Stemming from the lower leg of the swine, ham hock is typically used for seasoning purposes on other dishes. It’s handy for adding some juicy flavor to soups, stews, and veggies.

This fancily-named pork product is a type of cooked ham that’s been aged with a dry-curing process. The unique flavor of Prosciutto is known to work very well with Italian cuisine. That probably explains the name, which stands out quite a bit when it shares a list with ‘Pork Butt’.

What Are The Health Benefits And Drawbacks Of Ham And Pork?

Comparing pork products to other meats like poultry or fish, pork comes out higher in some areas. Iron, thiamine, and other such B vitamins are fairly rich in pork and ham. That said it’s lower in other nutrients than other red meats, like beef.

Ham is considered a complete protein, due to containing all nine of the essential amino acids. This means ham can play a major role in metabolism and muscle building if you’re looking to get some gains.

We’ve covered a lot in this article! As far as the original question goes, ham and pork both come from a pig. But ham refers to a specific part of the pig, processed in a particular way. Meanwhile, pork refers to every cut of meat from a swine.

So, while ham is definitely pork, pork isn’t always ham! Pork can be many other things, ranging from bacon to pepperoni. It can also be used to enhance otherwise unrelated dishes like soup, veggies, or curry.

That said, there’s an argument to be made that the best use of pork would be making a fine ham! 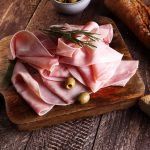 How to Reheat Sliced Ham in 7 Simple Ways 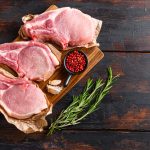 What Is The Difference Between Pork and Ham? 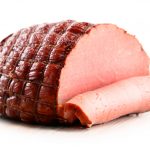 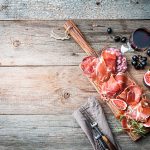