Chimichangas and burritos are both dishes you can find when you visit a Mexican restaurant. Both of these dishes are iconic tortilla staples, and they can be the perfect food when you want to enjoy some classic Tex-Mex food. These classic dishes are so similar. Are there really that many differences between the two?

Both chimichangas and burritos are staple dishes made using tortillas that you can find on the menu at most, if not all, Mexican restaurants. Both have grown in popularity over the years, and each has become more preferred over the other by patrons of Mexican restaurants.

Some will use one dish to explain the other, but this aligns the two dishes as being basically the same dish. There are differences between chimichangas and burritos that make them very different dishes, and these differences all start with what each dish truly is as well as the process it goes through to be made and served.

What is a Chimichanga?

It is thought that deep frying is part of American cuisine from those around the world, so it would make sense that the chimichangas would be a dish first created in the United States. This dish is, however, still rooted in Mexican culinary traditions.

Similar to the burrito, chimichangas are made with one big flour tortilla. This tortilla is then filled with ingredients, such as meats and spices. Once the tortilla is filled, it is rolled up and fried in oil.

Chimichangas are fried until they have a color that is golden brown and a texture that is crispy. The dish is then topped with a dressing, such as cheese or sour cream.

Unlike many foods that you can get at a Mexican restaurant, you cannot eat chimichangas with your hands as it will cause a big mess. It is best to eat a chimichanga with a fork.

This is because chimichangas are served on a plate and have a coating of toppings that can cover the top of the chimichanga. These toppings can fall off if you pick the chimichanga up with your hands, and this can cause a mess.

See also  Beef vs Veal: How is Beef Different From Veal?

What is a Burrito?

Burritos have become a very popular dish served at many Mexican and Tex-Mex restaurants. Burritos are known to be similar to tacos, but they are not the same. While the two may be made with similar meats and ingredients, burritos have those ingredients completely wrapped in the tortilla.

Burritos originally were made smaller in size, but the standard size for burritos has grown over time. Today, we think of burritos as being quite large since they are often filled with so many different ingredients.

Originally, burritos were not as filled with different meats, vegetables, and spices as they are today. Burritos were first made as a small wrap that contained around two or three ingredients. Today, there are many different types of burritos that are often served with various sides.

There are many different types of burritos. Most originate from different areas. These areas took the traditional burrito recipes and added more to the burrito. Some of these include the San Diego-style burrito and the San Francisco-style burrito.

A traditional burrito is mainly meat, cheese, and vegetables wrapped inside a tortilla.

The tight roll of the burrito allows for it to be eaten on the go rather than having to sit down at the restaurant to enjoy it. This has made the burrito one of the best items to be served for fast food.

You eat the burrito with your hands, typically while it is still hot. This makes it a great food for when you are on the go and cannot sit down to enjoy the food.

What’s the Difference Between a Burrito and a Chimichanga?

On the surface, the burrito and the chimichanga are very similar, but they have their differences. As previously discussed, they are both made in different ways and are served in different manners. There are more differences between the two popular dishes than just those. They contain different ingredients, have different textures and tastes, and look surprisingly different from each other.

Burritos and chimichangas also have different textures. You can feel these textures when you pick up the dish or take a bite of it.

Chimichangas will have a crispy texture on the outside, which is a result of the frying of the dish. While the outside texture of the dish may be crispy, you will find that the texture inside the dish is actually very soft.

A burrito, on the other hand, has a soft texture outside as well as on the inside. They are very easy to bite into. Burritos also tend to be much more juicy when compared to a chimichanga.

The taste of a burrito and the taste of a chimichanga can vary depending on the ingredients used to make each dish. Both dishes are soft once bitten into. A chimichanga may have a crispier taste when compared to the burrito, since it is fried before being served.

Chimichangas and burritos have very different appearances. It makes it easier to tell the two apart when you are ordering one or the other off the menu at a Mexican or Tex-Mex restaurant.

Is Chimichanga Just a Deep-Fried Burrito?

Burritos and chimichangas are both popular dishes that are served at Mexican and Tex-Mex restaurants. While they both seem similar on the surface, they have differences between the two that make it easier to tell the two dishes apart.

Burritos are one of the most common dishes ordered from Mexican and Tex-Mex restaurants. Burritos are flour tortillas that are filled with meats, vegetables, rice, and other ingredients. Chimichangas, on the other hand, are typically only filled with meat and cheese or rice. This makes it seem as though burritos should be the messier of the two.

Burritos are meant to be hand-held, while chimichangas are eaten on a plate with a fork and knife. Chimichangas are also fried, so they will have a golden brown color and a crispy texture. Burritos have a softer texture, since the tortilla is not fried.

The taste of both can depend on what ingredients are in each dish. Most meats can be eaten in the dish. Chimichangas will have a crispier taste to them since they are fried before being served. These are the main differences between burritos and chimichangas. 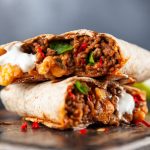 How to Reheat a Burrito 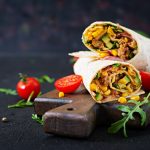 What is Best to Serve with Burritos? 14 Side Dishes to Try 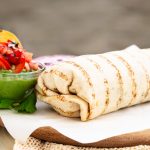 What’s the Best Way to Reheat a Chipotle Burrito? 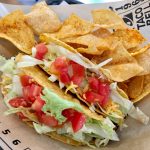 How To Reheat A Taco Bell Burrito