If this seems like a question with an obvious answer, that’s because it is, but let’s humor it for a moment. Is it okay for vegetarians to eat tuna? Is there any possible chance that tuna might be vegan friendly? The answer is unlikely to surprise you.

Absolutely not. Vegetarians and vegans abstain from eating the flesh of living creatures, and fish are of course living creatures. There’s no reason any fish, including tuna, would be an exception to that rule.

It’s at least somewhat understandable why people would get confused on this matter though. After all, fish is very frequently put into it’s own category, separate from other meats. It’s true that aquatic creatures are very different from their land-based counterparts.

Why Isn’t Fish Always Considered To Be Meat?

The taste, look and consistency of fish meat is certainly very distinct to itself. Compare and contrast with poultry, pork or beef, which have a number of similarities between them. Land-based animals gave us the idea of what meat should be like, and fish deviate from that to an extent.

Additionally, many have allergies specific to seafood, yet no issue with animals that roam the land. And seafaring creatures are fundamentally very different. Therefore fish and fish meat certainly tends to stand out, but all the same, it’s most certainly the flesh of an animal. Far from vegan friendly!

Insects fall under the same umbrella. It’s hard to consider the carcass of an insect to be ‘meat’, and the intelligence level of much insects is very much up for debate. But it is undoubtedly a living and (to some extent) thinking organism, in the most simplest of definitions.

Therefore eating them wouldn’t fly (no pun intended) for a genuine vegetarian either. So the question then becomes, what options are there for vegetarians and vegans?

What Can Vegetarians Eat Instead of Tuna?

Naturally, for those who don’t want to eat real fish but still have a hankering for the taste, there are always alternatives. These foods strive to replicate the taste and basic appearance of tuna, but don’t actually include any real meat. We’ll look into a couple of those now.

Obviously named ironically, Good Catch is one of the more reputable makers of 100% plant-based seafood alternatives. Per their website, Good Catch products are made through a combination of legumes for texture and protein, with an additive of algae oil to give it that seafood flavor, as well as omega-3 DHA.

Legumes used include peas, chickpeas, soy, fava beans, navy beans and lentils. They offer a number of fish-free tuna flavors, that include Naked in Water, Oli & Herbs and Mediterranean. All of Good Catch’s fish-free selections are confirmed to be vegan, vegetarian, non-GMO and gluten-free.

Vegan products love having clever or cutesy names like this. Tuno, meaning, no tuna! This brand makes fish-free tuna with non-GMO textured soy protein and seaweed to get the proper flavor and texture. As you’d imagine, Tuno products are similarly completely vegan and gluten-free.

There are three flavors out there for both canned and packaged Tuno products. The canned flavors consist of Lemon Pepper, Tuno in Spring Water and Tuno with Sriracha. Meanwhile, the packets include Thai Sweet Chili, Sesame Ginger and, once again, Lemon Pepper.

Sophie’s kitchen really goes the extra mile here. Not only does it have a 100% plant based tuna option, but a variety of other vegan friendly seafood options. These include plant based crab cakes, fish filets, salmon and shrimp! We’ll of course be focusing on their tuna product, which is called Toona. Bit confusing when spoken out loud there, but ah well, the full name on the can seems to be VeganToona.

Once more per their website, the Sophie’s Kitchen Toona is made using pea proteins and pea starch for texture, and seaweed powder to give it the proper ocean flavor. As we look into this, it’s interesting to see the different approaches taken to get to the same result. These products have similar ingredients, but they’re far from 1-to-1.

That’s a bit of a mouthful there, but hey, so is the vuna! Garden Gourmet is a brand under the Nestlé umbrella that provides vegan and vegetarian options. Sensational Vuna is their answer for tuna and comes in a glass jar. It’s evidently only made with six ingredients, making use of pea and wheat proteins to emulate the taste and flaky texture of tuna.

By the word of Nestlé, the R&D team labored for nine months over getting the look and taste of it down. This was done in many international facilities, including Switzerland and Germany. There’s something mildly discomforting about the word ‘vuna’, but that doesn’t reflect on the quality!

Lily’s Vegan Pantry is an old head in the vegan game. After all, most brands come from pretty new startups and initiatives, as vegetarian and veganism has become a lot less niche in recent years. Considering that, it’s impressive to know that Lily’s Vegan Pantry, originally known as May Wah, has operated since 1994, always with a dedication to provide meat-free food.

So you can say that the Pantry Tuna is one of the classics of fish-free tuna out there. It’s gluten-free and made primarily from soy protein. Emphasis on the protein… there’s 15 grams of the stuff per serving! That’s actually pretty key, because if you’re looking to put on muscle, there’s only so many vegan friendly options. Lily’s Vegan Pantry Tuna seems like a great place to look for such a thing!

BettaF!sh is a recently founded startup company from Germany that unveiled it’s flagship product last year, which just so happens to be a vegan tuna option. It’s called TU-NAH, and yes, the vast majority of vegan meat substitutes have silly names like this. But they’re gaining in popularity quickly, thanks in no small part to their partnership with retail giant Aldi.

TU-NAH contains no soybeans or wheat, instead being made from seaweed and organic fava beans. They include three varieties of flavors. At present they are located all throughout Germany and are quickly spreading around internationally.

See also  Can You Eat Raw Tuna? User's Guide on How to Safely Consume It

What Do You Call A Vegan Who Eats Tuna?

Well, you certainly don’t call them vegans! But in all seriousness, there are a number of people out there who prefer to go this route. They avoid traditional meats and might even avoid animal products like eggs or milk like vegans do. However they do make an exception for seafood.

They’re called Pescetarians. These people largely follow the same diets as vegetarians, but are still willing to eat tuna or any other type of seafood. At first blush, this might seem like a head scratcher. On the surface it can look like a very arbitrary exclusion, but there’s a variety of things that can motivate this choice.

Why Do Pescetarians Make An Exception For Seafood?

It may simply be a health-conscious choice more so than any moral or lifestyle-driven decision. Fish do have higher health benefits on average than something like chicken for example. Depending on what you believe, it’s not crazy to think somebody might think a diet of fish and veggies is simply the healthiest choice.

As far as other reasons go, it’s worth noting that making the switch to veganism can be pretty difficult, especially later in life. So the Pescetarian route can be seen as a compromise, limiting meat and animal intake without wholly forbidding it. Pescetarianism goes well with certain religious beliefs as well, blending naturally with Judaism’s insistence on kosher food, since most fish is kosher.

Still there are some motivated by ethical concerns and argue that fish simply don’t count as meat, the same debate we started with. This argument lies in the theory that seafaring creatures aren’t as complex as land mammals, and don’t feel fear or pain in the same way. That is highly debated of course, and that discussion is beyond the scope of this site, so we’re gonna stop right there!

So, do vegetarians eat tuna? No, of course not, and it’s certainly not an option for vegans either. This is a question with a very simple and easy answer at the end of the day, but one that stirs up several other interesting questions.

Why do people ask this? Because fish is often separated from other meats, sometimes for objectively accurate reasons and sometimes for dubious and disputed ones. But at the end of the day, you can’t look at a fish swimming around nibbling food and say that it’s not a living, breathing creature.

As such, vegans and vegetarians wouldn’t dare touch the stuff. If that’s the kind of lifestyle you’re looking to live, no fish for you. But there are plenty of fishy alternatives out there! And if you’re not into that, there’s no shortage of Pescatarian diets out there you can follow, should that suit your fancy! 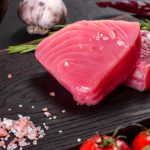 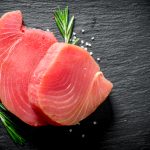 How To Thaw Tuna Steak 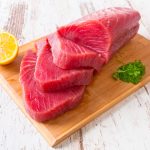 How Long Can Tuna Sit Out Unrefrigerated? 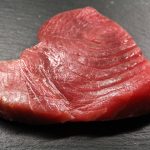 How Long Does Fresh Tuna Last in the Fridge? Answer Explained